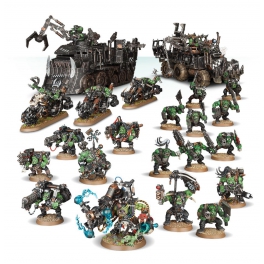 Orks fall upon their foes like a shouting green avalanche – tooled up with crude, improvised weapons and crude, improvised tactics, they’re an anarchic, battle-crazed force who live for the thrill of the fight. Addicted to violence, speed and brutality, they are resilient, resourceful and incredibly numerous – ‘ERE WE GO!

A fantastic way to begin the core of your own Ork army – or bolster one you already have – this is a great-value collection of miniatures representing the Orks’ Kult of Speed philosophy: bigger, faster, fightier! Included are the following 22 plastic miniatures:

- A Battlewagon, armed with a kannon, zapp gun and featuring a host of optional components;
- A Trukk, featuring a big bolt-on shoota, boarding plank and reinforced ram;
- A Big Mek with Shokk Attack Gun – well, this is a Big Mek. And he’s got a Shokk Attack Gun;
- A Warbiker Mob, 3 Orks on ramshackle yet powerful bikes, with options for a Nob;
- 11 Boyz, with a plethora of weapons including sluggas, choppas, shootas, heavy weapons and stikk bombz;
- 5 Lootas, 4 lugging deffguns and 1 with a kustom mega-blasta;