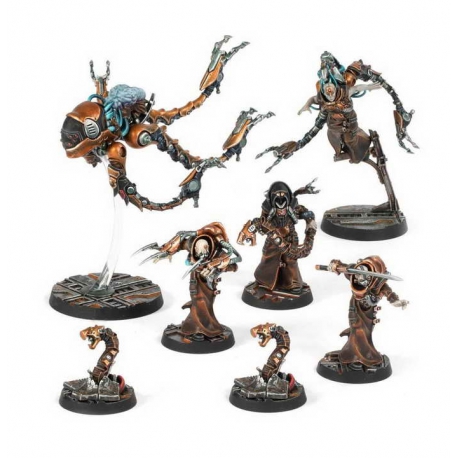 A Nacht-Ghul is an assassin and saboteur without peer. Crafted by psychic-science and esoteric chems, they are the edge of the blade in the dark that cuts away the enemies of the Delaque – or the enemies of their friends if it suits their purposes. Delaque gangs will often include these talented agents, though they do so with the knowledge that the Nacht-Ghul ultimately answers to the Star Chamber and the whispers of the Psychoterica.

Expand your Delaque Gang with these seven additional fighters. These secretive agents of House Delaque are equipped with a variety of specialist wargear to better enable them to perform their shadowy purpose. The two Nacht-Ghuls can be armed with either a shivver blade and serpent’s fang, while one of the Psy-Gheists is clad in a psychomancer's harness. With the exception of the Psychoteric Wyrms, who act as psychic nodes for their masters, all of the other fighters are psykers, and will offer your gang an enormous tactical advantage.

This kit is supplied as 98 components that make the following seven miniatures:

Rules for using the Nacht-Ghul, Psy-Gheists, Psychoteric Wyrm, and Piscean Spektor in games of Necromunda can be found in Necromunda: House of Shadow.