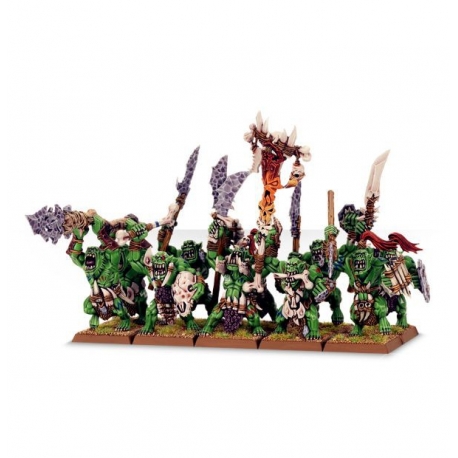 Savage Orcs believe in 'da old wayz' and have barely evolved since Orc tribes first started to roam the Old World. As a result they have remained as brutal, primitive creatures that believe in the merits of a sharp wooden spear over the more sophisticated weapons of other Orcs. In battle a mob of Savage Orcs is a disturbing sight indeed, with warpaint, tribal tattoos and animal pelts all clashing in a riot of colour that is entirely unnerving to their enemies. When the time comes to fight these beasts in combat there is little that can stand in the way of their frenzied barbarism.

This set will make 10 Savage Orcs with several different weapon options, including spears, shields, bows and a selection of brutal-looking hand weapons. There is also a really huge spear should you choose to equip your Savage Orcs with a Big Stabba. To make sure you never run out of options, this kit has 114 components for you to build your unit exactly how you want it.

This multi-part plastic kit contains 10 Savage Orcs, 10 25mm Square Bases and one 25mm by 50mm Closed Cavalry Base (for the Big Stabba team).

Dan from the Web team Says: Just like their description suggests, the Savage Orcs are a very lively, exciting unit to build and paint. Each Orc is festooned with teeth (teef), claws, animal hides, bones and crude weapons, which gives them the appearance of a totally unorganised rabble, but one that is equally hell-bent on clubbing something to death in the immediate future. The whole unit screams with violent emotions, from the gaping tooth-filled maws to the aggressive running poses. The coolest thing about the kit though has to be the Big Stabba, which is hilariously unsubtle but gives the unit D3 Impact Hits and causes Multiple Wounds (D3) when smashed into a Large target.

20 other products in the same category: