/ Games with miniatures/GamesWorkshop/Books/AGE OF SIGMAR: SKIRMISH (80-20-60) 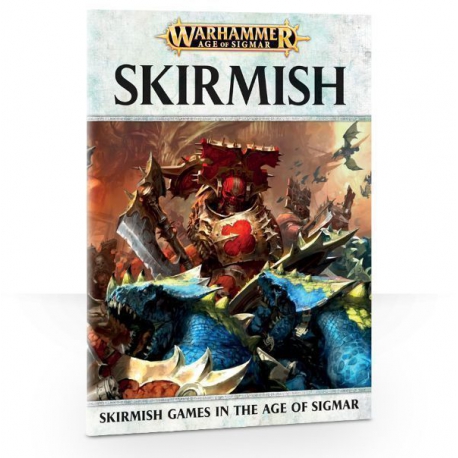 DESCRIPTION
Lying forgotten in the Desert of Bones, the ruins of the spectacular ancient city Shadespire are brimming with untold riches and power, ripe for the taking. Though it is now a mere skeleton after being put to the torch by Nagash, the cities’ treasures remain, a morbid hint at the splendour that existed before Shadespire’s soul was torn away…

Take command of a small warband of warriors and put your skill, wit and determination to the test with Warhammer Age of Sigmar: Skirmish, a book containing the information and rules needed to fight Skirmish battles – including a hard-fought campaign amidst the ruins of Shadespire! Assemble a small warband of single models and take to the gaming table, building renown and adding to your warband with every glorious victory.

CONTENTS
– Modifications to the Warhammer Age of Sigmar rules for intense fights between small warbands, including models fighting as individuals and changes to Battleshock
– Rules for creating warbands from warriors across the four Grand Alliances
– All new command abilities, artefacts of power, spells and mysterious terrain rules
– The Shadespire Campaign, pitting two or more warbands against one another in search of treasures in the ruins
– Rules for earning and spending renown to expand your warband between games
– Rewards of Battle: charms, glyphs and relics to enhance your warriors
– Skirmish Matched Play: rules for building balanced warbands and pitting them against one another using General's Handbook battleplans

Please note that you’ll need the free Warhammer Age of Sigmar rules sheet and warscrolls to use this book.

29 other products in the same category: