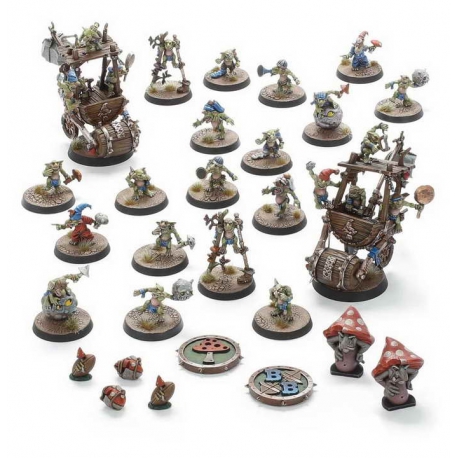 Ogres Snotlings have long admired the game of Blood Bowl from the sidelines, but rarely have they taken to the pitch for… obvious reasons. Well all that’s about to change, as the “Mighty” Crud Creek Nosepickers have blasted down the barriers to bravely (or foolishly) pave the way for their diminutive kin. They're ready to flood the gridiron with a squirming, stinking wave of pint-sized players, along with all the zany contraptions and silly tricks they could dream up in their mushroom-addled brains.

While Snotlings may make Halfling teams look downright athletic, and Goblins seem burly in comparison, what these little blighters have in spades is, well, lots more of themselves! They're so small and energetic, the refs can never keep count of how many are on the field at once! Their numerical advantage, combined with a willingness to bend and break the rules, makes them very unpredictable indeed. In short, Snotlings are all about the sort of wild shenanigans that make Blood Bowl an absolute pleasure to play. Not only are they fun, but they have some devious tricks that can actually win a game from time to time, quite literally keeping your opponent on their toes.

This multipart plastic kit contains all the components you'll need to build the Crud Creek Nosepickers, a Snotling team for use in games of Blood Bowl, containing 12 Snotlings, 2 Snotling Fungus Flingas, 2 Snotling Fun-Hoppas, 2 Snotling Stilty Runnas, and 2 Snotling Pump Wagons! You'll also find 2 turn counters, 2 coins, 4 Snotling-themed balls, 20x 25mm bases, and 2x 32mm bases with holes.are natural Blood Bowl players, with a long tradition of playing for other teams who can afford to feed them (woe betide the coach who fails to account for their appetite). Ogre teams, however, bring a new level of violence to the game, as their rosters feature not just one or two of these massive brutes, but often 4 of them! Of course, they're also accompanied by a veritable swarm of Gnoblars, tiny greenskin runts who have no natural athletic ability, but enough cunning and wit to know they're supposed to grab the ball from time to time whilst the Ogres are busy pummeling their opponents. Once in a while, the Ogres will give the ball-holders a little kick towards the End Zone, thus scoring some points with a bit of luck.

If you want to play some smashy Blood Bowl, you can do no better than an Ogre team. They play unlike anything else, excelling at deleting the opposing team, one by one, until they can walk the ball across the pitch unopposed. You’ll focus on hiring a handful of Ogres, and the utterly replaceable gnoblars fill out the rest of your slots. Ogres are a blast to play, and a nightmare to go up against.

This multipart plastic kit contains all the components you'll need to build the Fire Mountain Gut Busters, an Ogre team for use in games of Blood Bowl, containing 4 Ogres (1 of which can be built as a Runt Punter), and 12 Gnoblars with interchangeable heads! You'll also find a roster sheet, transfers, 2 turn counters and 2 coins, 4 Ogre-themed balls, and a mix of 14x 25mm bases and 4x 32mm bases.

12 other products in the same category: